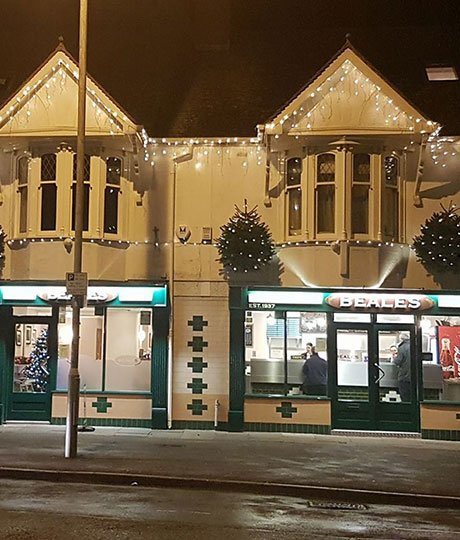 In 1930 Robert Beale senior and his son Arthur Robert Beale, builders of their day, built the houses on Eastern Promenade that our business premises occupy. In 1937 Arthur Robert Beale with his wife Lilian May opened Beales Park Fish Restaurant, cooking on a coal fired range, while fish was collected from the harbour by hand trolley.

Through the second world war, soldiers of many nationalities came to shop, some eating their chips from their helmets, while their rifles were stored in the toilets.

Then enlisting the help of their elder children Mary, John & June, Park Fish Restaurant became an established part of Porthcawl. In the mid 1970’s youngest son and war baby Arthur William and wife Marilyn took the helm, firmly establishing Beales as the place to go in South Wales for the best Fish & Chips.

Then in 2005 their children and the 3rd generation of Nicholas, Gareth & Helen modernised and extended the premises to include a new restaurant and expanded takeaway. Incorporating state of the art equipment to deal with the increased capacity and maintain our high standards. Recently extending the restaurant in the winter of 2018, adding a cosy upstairs seating area with modern log burner for those cold winter days, increasing capacity to 90 covers.

Widely regarded as the place to come for the finest fish & chips from far and away!

Truly a family business for over 80 years!

This website uses cookies to improve your experience while you navigate through the website. Out of these cookies, the cookies that are categorized as necessary are stored on your browser as they are essential for the working of basic functionalities of the website. We also use third-party cookies that help us analyze and understand how you use this website. These cookies will be stored in your browser only with your consent. You also have the option to opt-out of these cookies. But opting out of some of these cookies may have an effect on your browsing experience.
Necessary Always Enabled
Necessary cookies are absolutely essential for the website to function properly. This category only includes cookies that ensures basic functionalities and security features of the website. These cookies do not store any personal information.
Non-necessary
Any cookies that may not be particularly necessary for the website to function and is used specifically to collect user personal data via analytics, ads, other embedded contents are termed as non-necessary cookies. It is mandatory to procure user consent prior to running these cookies on your website.
SAVE & ACCEPT
Scroll to Top